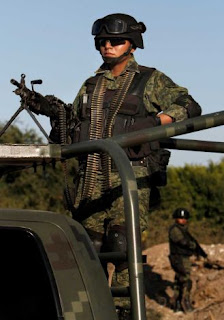 Mexico does not have the death penalty regardless of how many innocent folks he pulled off of buses and murdered, senselessly and cowardly.

MONTERREY, Mexico (AP) — Police in northern Mexico have captured an alleged member of the Zetas drug gang who confessed to killing at least 75 people, including many who were pulled off buses, authorities said Monday.

Enrique Elizondo Flores told investigators 36 of his victims were bus passengers traveling through the town of Cerralvo, near the border with Texas, said Nuevo Leon state security spokesman Jorge Domene.

Elizondo was detained Jan. 20 in the town of Salinas Victoria, but authorities delayed announcing his arrest so they could verify details of his confession, state Attorney General Adrian de la Garza said.