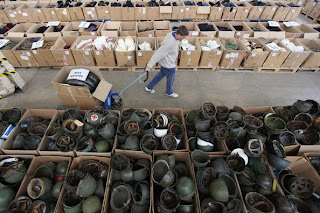 Fleeing is generally considered to be a fairly reliable indication of guilt.

A federal judge denied bail Tuesday to a San Antonio woman charged with helping her ex-husband sell $918,000 worth of uniforms and computers stolen from a Defense Department unit at Fort Sam Houston.

An indictment alleges Gabriela de la Maza and Francisco de la Maza, whom she divorced in 2010 amid the investigation, spent the money on five homes, credit card bills and other items.

Special agent Carlos Markham of the Defense Criminal Investigative Service testified that Francisco de la Maza, a U.S. citizen who spent more than 20 years in the Army before retiring in late 2009, is believed to have fled to Mexico.