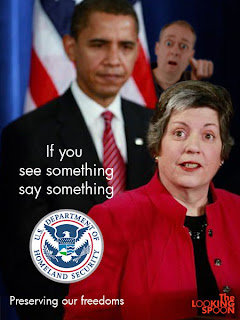 Why are they doing this?

Wait!  If I'm being monitored I don't want to seem rude.

Why are YOU doing this?

It's unclear exactly why, but the Department of Homeland has been operating a "Social Networking/Media Capability" program to monitor the top blogs, forums and social networks online for at least the past 18 months. Based on a privacy compliance review from last November recently obtained by Reuters, the purpose of the project is to "collect information used in providing situational awareness and establishing a common operating picture." Whatever that means. Either way, the list of sites reported by Reuters reveals in a Wednesday afternoon exclusive is pretty intriguing: