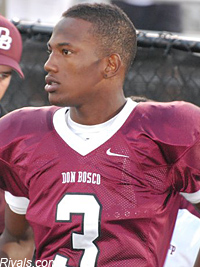 Its a harsh lesson to learn but I hope it all works out for him in the long run.

I also hope it works as an object lesson to not be so quick on the Tweet trigger.

Before last week, Yuri Wright was known as one of the top shutdown high school cornerbacks in the country.

The 6-foot 2, 180-pounder from Don Bosco Prep in Ramsey, N.J., played in the U.S. Army All-American Bowl at the Alamodome. He had 19 scholarship offers, including ones from Michigan and Notre Dame.

But, after sending a series of sexually explicit and profanity-laced tweets, Wright learned the real-world consequences that can come from words said in the social media realm.