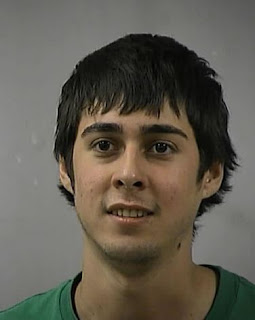 Wow Mr. Pearis you are just too pretty a fellow to go to prison.

There are gonna be a lot of happy inmates if and when you get convicted and show up at the prison.

Good Luck with that Buddy!


A man accused of exchanging gunfire with people inside an apartment while he allegedly tried to rob them was arrested last week in El Paso, officials said.

Reese Pearis, 21, is being held in the El Paso County Jail without bail. He faces an aggravated robbery charge out of Bexar County and two charges — evading arrest and possession of marijuana — out of Guadalupe County, according to records.

According to the U.S. Marshals' Lone Star Fugitive Task Force, Pearis was wanted in connection with a home invasion and robbery that took place at an apartment complex last Monday. Pearis and two others reportedly broke into an apartment, a news release states, and Pearis exchanged gunfire with the apartment's occupants. He fled the scene, and the task force learned Pearis may have headed to El Paso.