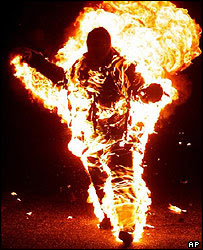 Congratulations on getting charged now with Attempted Capital Murder.

I'm sure your family is proud of your achievements.


San Antonio police charged a man Monday with attempted capital murder after witnesses said they saw him pour gasoline on Richard Rodriguez Jr. then set him on fire.

Juan Jesus Robles, 37, was already in Bexar County jail on a different charge, officials said. Rodriguez, who turned 23 in the hospital, was burned over more than 85 percent of his body, and remains in critical condition, the arrest warrant affidavit said.

Rodriguez was carrying a gas can when he began fighting with three men he encountered at Guadalupe and South San Marcos streets the night of Jan. 7, an arrest warrant affidavit said. Those men told police they beat him up and left him on the ground, but then tried to stop Robles, who they saw rob Rodriguez, pour gas on him and set him on fire, the affidavit said.