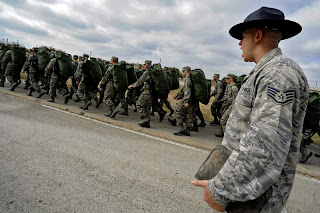 This predatory behavior should not be tolerated.

A trial was ordered Friday for Staff Sgt. Luis A. Walker, a Lackland AFB instructor charged with having sexual contact with 10 recruits.

The action punctuated Air Force statements condemning such behavior, but whether the military has taken the problem seriously enough is a matter of some debate.

Since 2001, 10 instructors at Lackland, home of Air Force boot camp, have been convicted of having sex with trainees. All were sentenced to 12 months or less in jail.