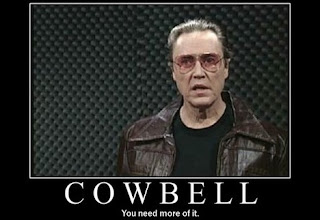 I thought everything needed more cowbell?

Apparently so did the fellow now called the defendant.

Wis. man arrested for playing too much cowbell
Associated Press -

OSHKOSH, Wis. (AP) — Demonstrators calling for the recall of Wisconsin Gov. Scott Walker learned there really is such a thing as too much cowbell.

Oshkosh police arrested a 26-year-old Appleton man on Thursday after he kept playing a cowbell and shaking it in an officer's face when he and other protesters were told to be quiet.

The Oshkosh Northwestern reports (http://oshko.sh/zKwPVV ) that when the officer tried to take the cowbell, the man pushed the officer. A 25-year-old Appleton woman then hit the officer in the back with her picket sign while the man was being handcuffed.