The gay dance club housed in a former synagogue 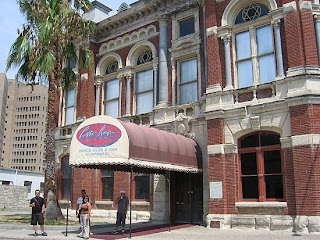 Well I guess he won't be causing anymore disturbances at that club.

Or any other club for that matter.  Ever.

Nice going, security .... not.  You've probably just bought yourselves and the club one heck of a wrongful death lawsuit.

A man reportedly involved in a disturbance at a popular downtown nightclub died early Sunday after being escorted out of the establishment then handcuffed by security.

Lt. Matthew Podwika said San Antonio police officers were called for a disturbance around 2:15 a.m. at the Bonham Exchange, at Houston and Bonham streets. Gilbert Garza, 46, was handcuffed and on the ground when the officer got there, Podwika said.

Thinking Garza looked ill, the officer requested EMS; paramedics pronounced him dead at the scene. Podwika said Garza wasn't under arrest or being detained by SAPD when he died.