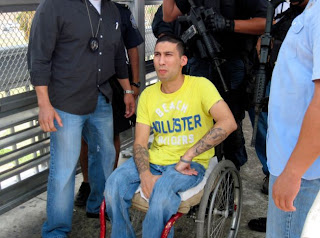 It doesn't sound like this fellow will be getting out anytime soon.


He could serve life in Federal prison.
By Jason Buch - Express-News

A Zeta hit man pleaded guilty to firearm charges Friday in a Laredo federal court, admitting taking part in a 2005 killing during which members of the cartel posed as police officers.

According to a transcript of another Zeta hit man's interview with police, the brazen midday hit was ordered by Miguel “El 40” Treviño Morales, now believed to be the organization's second-in-command.