Boy is he in trouble when they find him 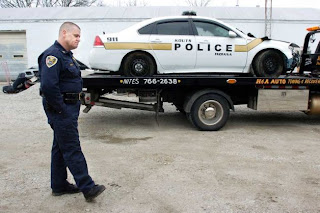 Ummm, needless to say the Chief does not look very happy.

You wouldn't look happy either after they found your patrol car submerged in a retaining pond and pulled it out.


INDIANAPOLIS (AP) — A handcuffed drug suspect who stole and wrecked a police cruiser in northwest Indiana is still on the loose, but he did not take any loaded weapons from the car, authorities said Wednesday.

William Francis Blankenship stole the car Tuesday from a local officer in the Porter County town of Kouts and then used the police radio to ask where to find the car's cigarette lighter — and a key to unlock himself, police said.

"There was a conversation between him and one of our officers," Porter County Sheriff's Sgt. Larry LaFlower said. The sheriff's deputy did not tell Blankenship how to remove the handcuffs or use the cigarette lighter, and instead tried to talk Blankenship into pulling over and giving himself up, LaFlower said.