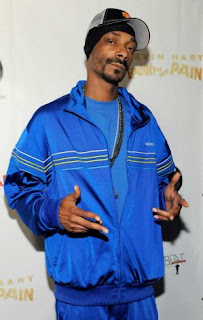 Why it seems just like yesterday we posted an article about Snoop Dogg saying that President Obama should legalize pot.

Wait!!  It was just yesterday!!

Is this an example of karma in action?

Hudspeth County sheriff's office said in a statement that Snoop Dogg, whose name is Calvin Broadus, was arrested Saturday at the Sierra Blanca highway checkpoint and cited for possession of drug paraphernalia, a misdemeanor typical in cases involving small amounts of marijuana.

According to the sheriff's office, a border agent smelled marijuana smoke coming from the bus and ordered everyone off so that a dog could inspect the vehicle. A prescription bottle with several marijuana cigarettes was found in a trashcan, and more marijuana was found in two other containers. In all, 0.13 pounds of the drug were found.