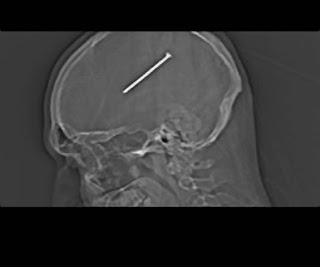 The doctors nailed it!

OAK LAWN, Ill. (AP) — Dante Autullo thought his doctors were joking. The suburban Chicago man was sure he'd merely cut himself with a nail gun while building a shed. But they assured him the X-ray was real: A nail was lodged in the middle of his brain.

Autullo was recovering Friday after undergoing surgery at Advocate Christ Medical Center in Oak Lawn, where doctors removed the 3 1/4-inch nail. It had come within millimeters of the part of the brain that controls motor function.

"When they brought in the picture, I said to the doctor 'Is this a joke? Did you get that out of the doctors joke file?'" the 32-year-old recalled. "The doctor said 'No man, that's in your head.'"