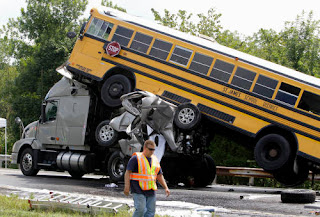 Fortunately this photo is not from this incident.

Northside Independent School District placed a district bus driver on administrative leave Tuesday after a citizen reportedly saw him texting and driving a bus with children on board.

On Friday, the tipster called the district's transportation department after the person allegedly saw the man driving erratically down the road and then observed him texting behind the wheel at the intersection of Wurzbach and Fredericksburg roads, said district spokesman Pascual Gonzalez. San Antonio has passed a law banning texting while driving.

The transportation department then retrieved the video from the bus and called the driver in.