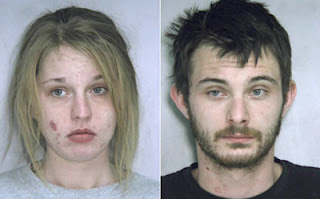 I don't want to mix metaphors but these two look like real douchebags.

The bizarre January 7 incident outside a bar in Metal Township resulted in the arrest of Patricia Deshong, 25, and Quentin Deshong, 22, on a variety of charges, including attempted arson, public drunkenness, and criminal mischief.

According to State Police troopers, the Deshongs seriously damaged a 2006 Ford Fusion, which had its windshield and windows either cracked or broken, was covered with dents, and had blood on the front passenger seat. The car’s hood was also open and various hoses had been disconnected.