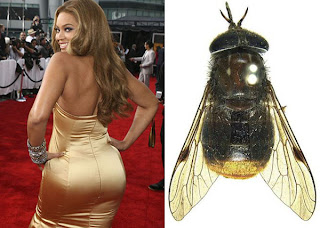 What an *ahem* honor!

Beyonce gets fly with golden booty named after her
Associated Press -


CANBERRA, Australia (AP) — A newly discovered horse fly in Australia was so "bootylicious" with its golden-haired bum, there was only one name worthy of its beauty: Beyonce.

Previously published results from Bryan Lessard, a 24-year-old researcher at Australia's Commonwealth Scientific and Industrial Research Organization, were recently announced on the species that had been sitting in a fly collection since it was captured in 1981 — the same year pop diva Beyonce was born.

He says he wanted to pay respect to the insect's beauty by naming it Scaptia (Plinthina) beyonceae.