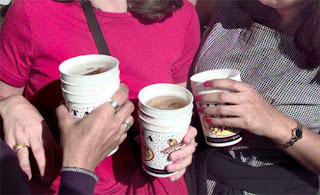 Just look at our DWI numbers, that's a clue too.

Americans belly up to the bar for binge drinking
San Antonio among the top 20 cities where too much alcohol is consumed too frequently.
By Don Finley - Express-News


A lot of Americans are knocking back way too many brews in one sitting, and they're doing it surprisingly often, federal health officials said Tuesday.

In a new report, the Centers for Disease Control and Prevention said more than 38 million adults, or 17.1 percent, told government survey takers they engage in binge drinking — on average once a week, and eight drinks at a time.

The numbers — and bar tabs — are higher among young adults. More than one in four of those age 18 to 24 admit to binging on alcohol, consuming on average nine drinks at a single sitting.