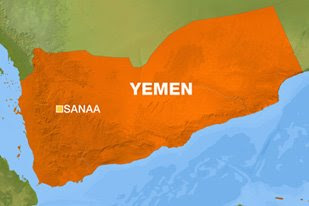 Why do folks go there?

I mean, I am sure its a lovely setting, lots of sun, beach and nice temperatures, especially compared to Holland at this time of year.

A Dutch couple has been kidnapped in the Yemeni capital Sanaa.

The pair was taken to a rugged mountainous region southeast of the capital on Tuesday after their car was hijacked.

A Yemeni official, who declined to be named, said the abductors were demanding the release of two of their relatives arrested by the authorities in exchange for the hostages.

Speaking by cell phone that one of the kidnappers had allowed her to use, Heleen Janszen spoke to the Associated Press from a village where she and her husband, Jan Hoogendoorn, 54, were being held.

Janszen, 49, said five armed men hijacked their car with them inside, forcing them into traditional Yemeni clothing to leave the city undetected.

But she said they were being treated well by the kidnappers, though there was no way of knowing if she was speaking under duress.

"It was a very classical kidnapping situation," Janszen said.

"We were offered lunch and tea, and were allowed to take a walk and take pictures. It's such an adventure - that's the only way to cope with it."

Sheikh Ali Nasser Serag, their leader, told the Associated Press they took the couple to put pressure on the Yemeni government for compensation after six of his tribesmen were wounded in a gun battle with police in April 2008.

"We talked to the mayor and the government and everyone important,'' he said.

"But no one listens. So this way we will put pressure on our government and finally get justice."

Yemeni tribes have seized foreigners before to press the government to meet their demands, mainly to free clan members from jail.

In December, three Germans - an aid worker and her visiting mother and father - were freed after being held for less than a week by tribesmen, who received a ransom fee of about $100,000 from the Yemeni government.