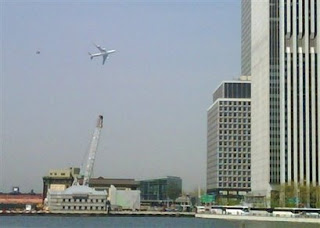 How stupid can the Feds be?

Also what a way to make people get even more concerned the President isn't going to make this country as safe regarding terrorist (oops, I mean man-caused calamities) attacks.

A furious President Barack Obama ordered an internal review of Monday's low-flying photo op over the Statue of Liberty.

CBS 2 HD has discovered the feds will have plenty to question.

Federal officials knew that sending two fighter jets and Air Force One to buzz ground zero and Lady Liberty might set off nightmarish fears of a 9/11 replay, but they still ordered the photo-op kept secret from the public.

In a memo obtained by CBS 2 HD the Federal Aviation Administration's James Johnston said the agency was aware of "the possibility of public concern regarding DOD (Department of Defense) aircraft flying at low altitudes" in an around New York City. But they demanded total secrecy from the NYPD, the Secret Service, the FBI and even the mayor's office and threatened federal sanctions if the secret got out.

"To say that it should not be made public knowing that it might scare people it's just confounding," Sen. Charles Schumer said. "It's what gives Washington and government a bad name. It's sheer stupidity."

The flyover -- apparently ordered by the White House Office of Military Affairs so it would have souvenir photos of Air Force One with the Statue of Liberty in the background -- had President Obama seeing red. He ordered a probe and apologized.

"It was a mistake. It will never happen again," President Obama said.

The NYPD was so upset about the demand for secrecy that Police Commissioner Ray Kelly vowed never to follow such a directive again and he accused the feds of inciting fears of a 9/11 replay.

"Did it show an insensitivity to the psychic wounds New York City has after 9/11? Absolutely. No questions about it. It was quite insensitive," Kelly said.

The cost of the frivolous flight was about $60,000 an hour and that was just for Air Force One. That doesn't include the cost of the two F-16s that came along.

The mayoral aide who neglected to tell Mayor Michael Bloomberg about it was reprimanded.
Posted by Sam at 7:16 AM