Boldly going where no Man has gone before 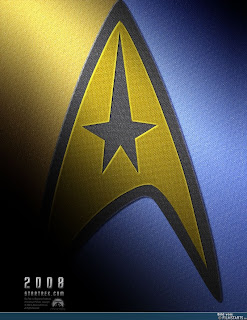 having watched the show when it first ran on TV I have always been a fan and was generally disappointed by most, but not all, of the movies.

I am psyched to go see this one big time, however.

BTW its Trekkie not Trekker and no, I am not a Trekkie. :)

Just when you thought that the Star Trek phenomenon had truly run its course, along comes J. J. Abrams’s stunning prequel to resuscitate the most enduring franchise in sci-fi history. The past five decades have produced five television series and ten films — not all of them successful — so veteran Trekkers had no right to expect such a dazzling and beautiful rebirth.

Yet Star Trek, released in Britain on May 8 and given its premiere last night, is perfectly pitched to satisfy Trekker nerds and a more general action-flick audience. Abrams, who directed Mission Impossible III, brings his blockbuster flair to bear on a story that starts with a massacre and rarely draws breath for the next two hours as it unravels a deadly battle between the Federation and a rogue Romulan from the future who is bent on destroying Earth.

Without sacrificing the majesty of Gene Roddenberry’s humanitarian ideals or the humour that is Star Trek’s salvation, Abrams’s film is a rollicking space adventure that makes you fall in love with the original series all over again. It shows how the Enterprise crew came together to avert the Romulan threat and, more importantly, how Captain Kirk, the incorrigible young rebel, and Spock, the conflicted half-human, half-Vulcan genius, forged their lifelong friendship. And with Spock and Uhura getting it on (the first truly interracial kiss!), there’s even the hint of a love triangle still to come.

The writers, Roberto Orci and Alex Kurtzman, cleverly weave their young heroes into creditable precursors of Star Trek’s two most iconic figures, while the performances wonderfully encapsulate their characteristics. Chris Pine’s young Kirk, who enjoys driving his uncle’s classic car off a cliff and cheats in his Star Fleet exam, has William Shatner’s smug swagger and virile vanity down to a T, while Zachary Quinto (best known as the monstrous Sylar in TV’s Heroes) oozes intellectual arrogance as the forerunner to Leonard Nimoy’s Spock.

The other performances are fun too, including Simon Pegg’s comic turn as Scotty, the engineer; Karl Urban’s delightfully cynical Dr McCoy; and Eric Bana’s intensely vengeful Nero, the Romulan bad boy with a very nasty — but visually ravishing — spaceship at his disposal. And for old-time fans, there are heroic cameos for Chekov (here portrayed as a hyperactive teenager with a barely intelligible Russian accent) and a sword-wielding Sulu, and a first name for the ever-sexy Uhura (played with smouldering charisma by Zoe Saldana).

The movie looks gorgeous. Gone is the gloom of the last Star Trek film, Nemesis (2002), which seemed cast in the depressing shadow of George Bush’s post-9/11 America. The prequel, though conceived before the rise of Barack Obama, taps into the optimism of his presidency. If thoughtful philosophical discourse of the Star Trek kind is at a minimum here, there’s certainly no shortage of narrative momentum, a skill Abrams earlier exhibited as co-creator of the hit TV series Lost.

The new 23rd-century technology looks a lot more up to the minute than the original — though the latter’s cheesy cardboard aesthetic is fondly remembered — and the special effects are state of the art, including the requisite CGI monsters. But the creators have not forgotten Star Trek’s 1960s origins. There are saucy ensigns in mini-skirts, green-skinned girlfriends, kooky aliens in bars and even an appearance by Leonard Nimoy as old Spock. William Shatner, much to his annoyance, was not invited to join the party. But then, as the original James Tiberius Kirk, he had more than enough chances to save the galaxy.