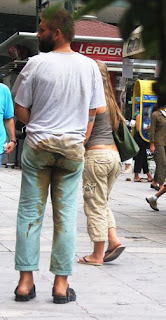 Maybe getting scared shitless will get him scared straight?

CENTERVILLE — A teenager suspected of car burglary was so surprised when he opened a car door to find a police officer sitting inside that he messed his pants, police said.

It happened about 1 a.m. Saturday as Salt Lake County sheriff's deputy Chad Taylor was returning to his Centerville home from working a shift.

"I was in my personal vehicle, but I was in uniform," Taylor told the Deseret News Monday. "I'd pulled in my driveway and was on the phone with another deputy when I looked in the rear-view mirror and saw this guy trying to get into my wife's car."

Taylor watched the teen then move up toward his car.

"Right as his hand goes to check my handle, I kick the door open," Taylor said. "I said, 'You'd better stop right there! Police!' I'm not kidding, it was quiet as can be, and I heard …"

The 16-year-old boy turned and ran, chased by Taylor, who called 911 as he ran after the teen through the neighborhood. The boy was scrambling so fast, Taylor said, he lost his shoes. Centerville police responded to help catch the teen.

The boy dashed into a friend's house, where a party was going on, police said. Officers were let into the house where they found him — and discovered that he had soiled himself, Child said.

Police said the teen implicated a friend whom Taylor saw trying to break into cars across the street from his home.

"He gave up his friend," Child said, pointing to another 16-year-old who was also arrested in the burglary investigation. Police believe the two had been working together, burglarizing cars in the neighborhood. Child said officers recovered some cash and CDs they believe had been taken from cars. The two boys were booked into the Farmington Bay Youth Detention Center for investigation of vehicle burglary and theft.

Detectives were trying to determine if the teens were involved in a rash of weekend car break-ins.

"We've had some more reports over the weekend that we're sure they're suspects in," Child said.