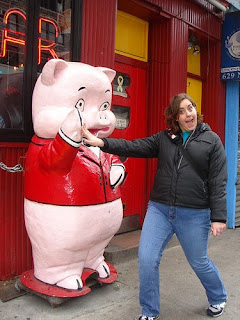 This is getting too close to home.

SWINE FLU: All schools closed until May 11
By Chris Cobb - The Herald-Zeitung

All public and private schools are closed, residents are being asked to avoid public gatherings and local officials are urging caution after three highly probable cases of swine flu have been reported in Comal County.

Although confirmation is pending from the national Centers for Disease Control and Prevention, three students at area schools have likely caught the potentially fatal virus, Comal County Health Authority Dr. Dorothy Overman said Tuesday. In addition, more than 30 other influenza samples collected locally are currently undergoing testing to determine if they, too, are evidence of the virus’ spread into the county.

As a result of the local outbreak, county health and school officials ordered a shutdown of every campus in both New Braunfels and Comal independent school districts until May 11, and area private schools have agreed to do the same. New Braunfels and Comal County leaders also have recommended closing all area day cares and advised residents to steer clear of public gatherings, including going to church, to reduce potential exposure.

“All of this is being done out of an abundance of caution,” said New Braunfels Mayor Bruce Boyer, after an emergency meeting of local school, government and health officials Tuesday night at the New Braunfels Civic Convention Center. “Right now this has not gotten to an epidemic stage, and we want to make sure that it doesn’t. We want to be proactive and make sure we do everything we can for the health and safety of our residents.”

The more than 30 other cases of confirmed Type A influenza were collected from numerous other campuses and health clinics throughout the county, Overman said. They will now be tested in a regional lab, and if a type is not determined, will be sent to the CDC with the other three for possible confirmation of swine flu.

It also will give time to treat those carrying a disease suspected of killing at least 152 people in Mexico as of Tuesday, according to The Associated Press. County authorities would not divulge the medical conditions of the three students Tuesday night, other than to say they were alive.

“There have been no deaths in Comal County and that’s what we’re trying to prevent,” Overman said.

There have been no swine flu-related deaths reported in the United States thus far, and the disease has generally proven to be treatable with early diagnosis.

Overman said stockpiles of additional medicine to treat the disease — like Tamiflu — will be available through the Texas Department of State Health Services should the need arise.

“We want to do everything we can to make sure everyone is as safe as possible,” said Comal County Judge Danny Scheel.

Symptoms of the disease mirror those of a typical flu with a fever and muscle aches, often combined with coughing or a runny nose.

The TDSHS is asking that anyone experiencing flu symptoms stay home, and residents who think they might be sick are being asked to call their physician before heading into the doctor’s office.
Posted by Sam at 6:33 AM