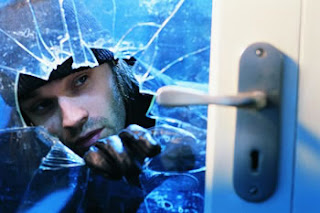 Can't knock the guy for his persistence, eh?

SALEM — If at first you don't succeed, maybe it's not a good idea to return to the scene of the crime.

But that's exactly what Salem police say William Gordon Casey did yesterday, even after a would-be burglary victim said he recognized Casey and got his car's license plate number. Within the next few hours, police say Casey returned to burglarize the same apartment, got in a hit-and-run accident, and fled from police, who also found cocaine in his home.

A Lafayette Street resident told police he'd come out of his bathroom around 11:30 a.m. to find Casey standing in his apartment. The resident said he surprised Casey, who said something about money owed to him and then fled out a window that had just been forced open. The resident saw Casey get into a Ford Escort and noted the license plate. The resident said he didn't find anything missing then.

But the resident left his home and returned less than two hours to see Casey's Ford Escort leaving. He reported that his front door had been forced open and four guitars and a 42-inch television were missing.

Casey didn't get very far before he ran into trouble, police said. At 1:03 p.m., a woman reported her Saturn was struck by Casey's Ford. She said Casey had gotten out of the car and started to approach her, but never put his Ford in park, so it hit her car.

Police had gotten an arrest warrant for Casey from the first burglary attempt and went to his house, 23 E. Collins St. There, they say, Casey jumped over a fence when he saw police officers, then kept running. He was caught behind Connors Road along the beach.

Other officers reported they'd been trying to see if anyone else was home when they saw a guitar on a sofa. They also thought they saw blood on a table sitting in the driveway. A man at the house's back door, Adam E. Cochrane, reportedly became belligerent and was detained.

Inside the home, police found the four missing guitars and spotted "a large amount of cocaine that was also in plain view in an open dresser drawer in one of the bedrooms," according to police logs. They applied for a search warrant for the guitars, television and cocaine.

Casey, 20, faces charges of malicious destruction of property over $250 and breaking and entering in the daytime with intent to commit a felony — charges from the first reported burglary. After the accident, he was charged with leaving the scene of an accident without making known his name, driving without a license and a marked-lanes violation. He was also charged with larceny over $250 and resisting arrest, police said.

Police searched Cochrane, 20, of 43 Boston St., Salem, and found the keys to the Ford Escort in his pocket. They accused him of helping steal the large television and charged him with trafficking in cocaine, larceny over $250, and breaking and entering in the daytime to commit a felony.