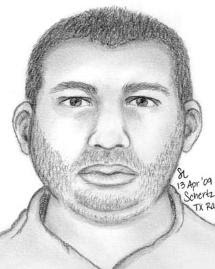 Let's get another one off the streets and behind bars.

Artist sketch of the suspect.

Please contact the Schertz Police Department at (210) 619-1252 if you have any information.

The Schertz Police Department released this week a sketch of a man accused of kidnapping and sexually assaulting a 14-year-old girl as she walked to school.

Detective Ernest Spradling said the teenager was walking to Samuel Clemens High School around 8 a.m. last Wednesday, when she was abducted by a man in a truck. The girl described her captor as a Hispanic male in his 20s or 30s, Spradling said.

The man took the teen to a creek bed in the 400 block of FM 1518, where she was sexually assaulted before being released, he said.

Though traumatized, Spradling said the girl was able to remember streets her kidnapper drove down, and a surveillance video from a business captured the truck's image.

Police are still looking for the suspect's truck — a rusty, red-colored mid-1990s model Ford F-150 with an extended cab.

Anyone with information is asked to contact the Schertz Police Department at (210) 619-1252.