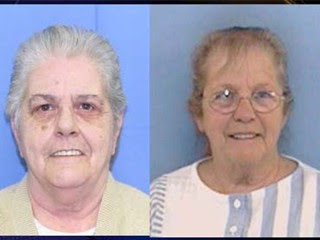 How do you know when times are really tough?

Elizabeth Marie Grube, 70, and her 65-year-old sister, Elaine Volkert, are facing drug charges after being arrested on April 14.

On the same day, a task force seized 988 bags of heroin with a street value of $20,000 and approximately $1,600 in cash from Volkert's home also in the 1000 block of Ehler Street. Police also seized quantities of Oxycontin and marijuana during the search.

According to investigators, both Grube and Volkert had been selling between 500 and 1,500 bags of heroin every two weeks for the past two months. Prior to selling heroin, the sisters had been selling crack cocaine, police said.

Two days after the sisters were arrested, their supplier, Juilo Cesar Checo, was taken into police custody.

Grube and Volkert have been charged with Possession with the intent to deliver a controlled substance (heroin) and criminal conspiracy. Bail was set at $20,000.

Checo was charged with Possession with the intent to deliver a controlled substance (heroin), criminal conspiracy and criminal use of a communication facility (cell phone). He is being held on $75,000 bail.
Posted by Sam at 9:40 AM