Don't let them get the Genie! 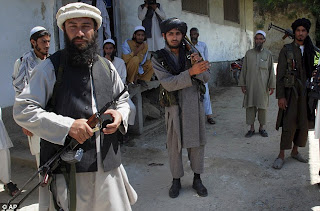 Boy, you think Iran is bad just let the Taliban get Pakistan, its nukes and delivery systems and then you really will have something to worry about.

You nervous yet, India?

You have one last chance to retreat - or face the consequences, Pakistan leader tells Taliban militants
By Liz Hazelton - Daily Mail Online

Taliban militants have been given one last chance to pull out of parts of Pakistan or face the consequences, a government leader said today.

'Those who took up arms must lay them down. Those who went to Buner, they must get out from Buner,' Iftikhar Hussain, a leader of the ruling Awami National Party said.

'This is the only way, and we are asking them for the last time.'

The warning follows huge international pressure with America claiming the state had effectively handed over power to militants when it ceded control of the Swat valley in February.

This week Taliban fighters moved out of their government-backed stronghold and moved into neighbouring Buner, sparking violent clashes with police.

Extremists are now just 60 miles from the capital Islamabad, sparking fears that they are are poised to wrest control of the country, which has nuclear capability.

This morning a Taliban spokesman said that fighters would withdraw from Buner later today.

'Our leader has ordered that Taliban should immediatley be called back from Buner,' spokesman Muslim Khan said.

Khan belongs to faction led by Taliban commander Fazlullah, whose stronghold is in the neighbouring Swat valley where the government has caved in to demands for the imposition of Islamic law.

The announcement came hours after the capital Islamabad came under threat from Taliban fighters.

It is feared that the state is one the brink of collapse as Taliban fighters get closer to the nuclear powers of the country.

As violence broke out in the north-west corner of the country, U.S. Secretary of State Hillary Clinton said Pakistan posed a 'mortal threat' to the world.

'I think the Pakistani government is basically abdicating to the Taliban and the extremists, she added.

And White House spokesman Robert Gibbs echoed her concerns. He said last night: 'The news over the past several days is very disturbing.'

The comments came as Pakistani paramilitary troops were deployed on Thursday to the Buner district, which has been virtually taken over by the Taliban and is close to the capital.


Unidentified gunmen their attacked convoy, killing a policeman escorting them.

The security of Pakistan is viewed as vital to American efforts to stabilise neighbouring Afghanistan. Militants are already attempting to cut off supply chains to troops stationed there.


Dozens of militants armed with guns and gasoline bombs blew up five tankers carrying fuel to NATO troops in Afghanistan.

There are fears that the Taliban, who have already been handed control of the Swat valley, could now take Islamabad and topple the government.

'If the Taliban continue their advances at the current pace they will soon be knocking at the doors of Islamabad,' Fazl-ur-Rehman, head of the Jamiat-e-ulema-e-Islam, the country's largest Islamic party, told parliament.

Taliban fighters have also set up checkpoints and are patrolling roads.


Many police and government officials appear to have either fled or are keeping a low profile.

'A platoon of the Frontier Corps has arrived in Buner to help police maintain security in the district,' Arsala Khan, a deputy police superintendent said.

Many in Buner are now too frightened to speak to reporters.

However, one judge said that the militants had entered the district in 'large numbers' and started setting up checkpoints at main roads and strategic positions.

'They are patrolling in Buner, and local elders and clerics are negotiating with them to resolve this issue through talks,' Istiqbal Khan said.

The militants in Buner also are using radio airwaves to broadcast sermons about Islam, and have occupied the homes of some prominent landowners, said a police official who insisted on anonymity because he was afraid of retaliation.


He said the militants have also warned barbers to stop shaving men's beards and stores to stop selling music and movies.

The militants have established a major base in the village of Sultanwas and have set up positions in the nearby hills, the police official said.

Taliban have also taken over the shrine of a famed Sufi saint known as Pir Baba, he said.

An attack on the NATO truck depo in Peshawar, near the Afghan border, only confirmed the deteriorating security situation.

The route is part of a critical supply line up through the famed Khyber Pass into Afghanistan.
Islamabad has made a desperate effort to downplay the Taliban advance.

Major General Athar Abbas, the Pakistan Army's chief spokesman, insisted the situation in Buner was not as dire as some have portrayed, claiming militants were in control of less than 25 per cent of the district

'We are fully aware of the situation,' Abbas said. 'The other side has been informed to move these people out of this area.'

Pakistan's president Asif Ali Zardari officially handed Swat and other districts in the Malakand Division to the Taliban last week after two years of clashes between militants and security forces.

The government had hoped that the peace deal would calm the region where hundreds have been killed and up to a third of the one-time tourist haven's 1.5million residents had been displaced.

However, the Taliban leadership now seem intent on pushing the boundaries of their regime.

In a video call from Afghanistan, Major General Michael S. Tucker said that the situation in Swat was a concern.


'We're keeping an eye on it, and are working daily with the Pakistan military,' he said.

Rasul Bakhsh Rais, professor of political science at Lahore University of Management Sciences, said the Taliban may have concluded from the Swat deal that authorities will cave in to violent demands for Islamic law elsewhere.


'They have natural allies in the religious political parties in other parts of the country,' he said.

'They have social and religious networks that have support their suicide attacks and attacks against the security forces.

'It is about the identity of Pakistan and the future direction that Pakistan can take.'

In a recent interview, Swat Taliban spokesman Muslim Khan said al-Qaida leader Osama bin Laden and other militants aiming to oust the U.S. from Afghanistan would be welcome and protected in Swat — a statement the government condemned.

He said the militants want to see all of Pakistan under Islamic law.

Pakistani officials complain that India and other regional rivals are fomenting trouble in its border regions.


Malik claimed that Bramdagh Bugti was living in Kabul and that phone taps implicated him in the kidnapping in Baluchistan of an American U.N. worker freed earlier this month.

Speaking in Parliament, Malik also alleged that Baluch rebels were being trained at camps in Afghanistan and implied that they were supported by India and Russia.

American officials acknowledge that such tension and mistrust is hampering efforts to combat the Taliban.