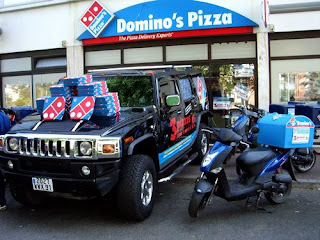 Don't play with your food, or anyone else's food.

Domino's is now considering criminal charges and a civil lawsuit against them.

The video comes from a Domino's Pizza in Conover.

"This is our special Italian Sandwich," says a woman who calls herself "Kristy" on a YouTube video.

At the same time, the man in the video named Michael puts cheese in his nose and then on a Domino's sandwich.

He also fakes a sneeze, but breathes all over the sandwiches.

"Did you all see that? He just blew a booger on those sandwiches," Kristy says.

Then, Michael touches it as if burying what came out of his nose.

They joke about "booger bread" and say if they ever opened their own restaurant, it would be shut down within 24 hours.

"He just farted on salami that goes on these sandwiches and in about five minutes they will be sent on delivery where somebody is going to be eating these," Kristy said.

Michael grabs a sponge and pulls his pants down, wipes himself and then washes dishes.

In an e-mail to Domino's, Kristy claims it was a prank, saying that if it was real she never would have put it on YouTube, and adds they never served the food they messed with.

That's not what she says on the tape.

She admits being immature and apologizes for hurting the company.

"The economy is bad enough without people being so immature to hurt places that have been there forever," Merritt said.

Domino's issued a statement Tuesday: "We are appalled by the actions of these individuals and they do not represent the 125,000 hard-working men and women of Domino's Pizza across the country and in 60 countries around the world."

A Health Department score on the window gives that Domino's Pizza a 96.5, an "A" rating.