The jury has spoken 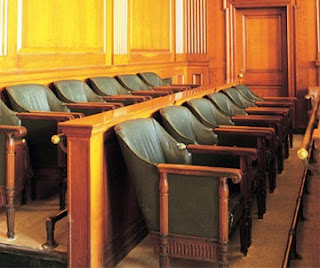 Great job by both Melissa Hines and Tiffany Groff in prosecuting Ms. Bittner.

Melissa is leaving our office to go into private practice and we wish her well.

Bittner convicted, sentenced to 65 years
By Scott Sticker - The Herald-Zeitung

A Comal County jury Friday sentenced a woman to 65 years in prison for abusing her newborn.

Amanda Bittner, 19, was convicted on four counts of felony injury to a child. A jury of nine women and three men found Bittner guilty of causing extensive injuries to her 6-week-old daughter in January of 2007, including multiple skull fractures, several broken ribs and bleeding in the child’s brain.

Bittner originally took the child to the hospital on Jan. 31, 2007, with extensive bruising and signs of head trauma. After an investigation into possible abuse by the New Braunfels Police Department, Bittner was charged and arrested.

Before the jury came to the guilty verdict, Comal County Assistant District Attorney Melissa Hines told them they were there solely for the baby.

“Let’s not forget what we’re here for,” Hines began. “We’re here for the baby. We are not going to have baby beaters in our community.”

She said Bittner intentionally and knowingly hurt her child.

“We as mothers are to use our arms as love and to care.” she said. “... To do something like this is beyond human.”

When the jury came back with a guilty verdict, defense attorney Ed Jendrzey asked them to give Bittner probation. During testimony, Bittner’s psychologist Brian Skop said she suffered from postpartum depression.

“When she had this baby, she was 17. She’s now 19,” Jendrzey told the jury. “She’s still someone we can save. You don’t need to incarcerate her. She needs intensive cognitive therapy. That’s something she won’t get in prison.”

He asked the jury to give her probation so she could be monitored and helped.

Hines, however, asked for Bittner to be punished with life in prison.

“This is a classic example of a defendant that deserves the worst that the law allows,” Hines said. “Don’t give this woman a free day. Give her everything she deserves, which is life in prison.”

Jennifer McGinley, the baby’s aunt, said she was happy with the sentence.

“At least after everything we’ve lost, we at last know that justice has been served,” McGinley said.

She said the baby is currently in foster care.

“The jury was quick, decisive and harsh with their verdict,” Barr said. “It shows that in our community, no age or disability excuses the abuse of our babies.”

Bittner was remanded to the Comal County Jail to await transfer to an undetermined Texas state prison.
Posted by Sam at 6:11 PM