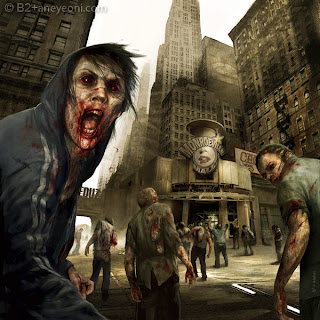 I take umbrage at the thought there are no 'zombies' at the courthouse.

Obviously he hasn't been paying attention.

As we follow reports of the swine flu spreading like the beginning of a zombie movie, it seems like only a matter of time for the next logical step in the progression - the infamous virus becoming a popular excuse for getting out of jury duty.

But there were no signs of such scheming as potential jurors showed up at the Bexar County Courthouse Monday for the first time since the outbreak became the cause celebre for hypochondriacs and news anchors alike. Not one facemask in sight.

Just more than 450 people showed up for jury duty - about normal for a Monday morning. One person called in, stating that she is a teacher in Cibolo and had been instructed not to come to San Antonio. She was allowed to reschedule, said Susie Urdialez of the courthouse's Central Jury Room.

"Everybody seemed OK," she said.

Following the zombie movie line of thinking, would it be legally possible to, say, rope off Cibolo and let them fend for themselves should the disease progress to Defcon 5 proportions? The answer, apparently, is yes. U.S. health officials drafted laws for mandatory quarantines in the wake of the bird flu panic several years ago. Here's an excerpt of a fill-in-the-blank quarantine declaration form drafted by the Texas Department of State Health Services for use by local authorities in case of an emergency:

According to the form, disobeying a mandatory quarantine could be a misdemeanor or a third-degree felony depending on how the quarantine order is drafted.

Of course, this is all hypothetical, worst-case-scenario talk. Hearsay will let you know the moment Bexar County judges start issuing rulings from behind facemasks.
Posted by Sam at 6:22 AM