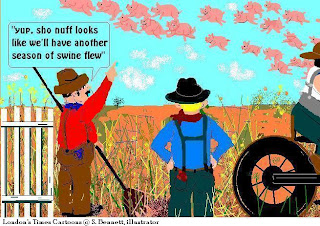 Call this hitting close to home.

I hope you all will stay healthy and safe.

Mrs. Man o' Law (a nurse) is freaking out over this. If Man o' Law and the little man o' Laws keep washing our hands, this much, we won't have any skin left on them.

As the number of suspected or confirmed local cases of swine flu climbed to 12, the Schertz-Cibolo-Universal City Independent School District said Sunday it will close all its schools for at least one week.

Another 10 suspected cases are being tested — all from the school district or household contacts of the infected students, and ranging from a 6-year-old to people in their 40s, Dr. Sandra Guerra, regional medical director for the Texas Department of State Health Services, said Sunday.

And there may be more out there.

Linda Moses of Cibolo said she's been sick with vomiting, diahrrea and a cough, and both of her sons have shown flu symptoms as well. One attends Clemens High School.

“I allowed him to go over and spend time with his grandparents, which I'm a little worried about now, because that's the last thing they need,” Moses said.

She hasn't been to a doctor yet, but said with the news of the district-wide closure, she's planning to see one as soon as possible.

“It was scary anyway, but it's really kind of hitting kind of close to home now,” Moses said.

Schertz has also closed its public library, Guerra said. Cibolo has closed its parks and is asking churches and places where people gather to postpone activities. It is asking private developments to close their parks as well.

Employees of Bexar County who live in Guadalupe County are being asked to be extra vigilant, and if they or any family members have flu symptoms, to stay home, said Bexar County spokeswoman Laura Jesse.

“Since the school district has made the decision to shut down for the next week, we advise our employees to use their better judgment, definitely, if they are feeling ill, not to come to work,” Jesse said.

That goes for the general population, too, said Emily Palmer, spokeswoman for the Texas Department of State Health Services.

“Our recommendations are that people who are sick stay home,” Palmer said. “I don't want to minimize this. We are concerned and we are actively doing surveillance.”

Instead of running their own tests or using private labs, doctors should contact the state or Metropolitan Health District officials and use those labs to test throat cultures, she said.

“I think we're prepared for that,” she said. “We understand people are people, and we tend to be mobile.”

Dr. Anne Schuchat, director of the CDC's National Center for Immunization and Respiratory Diseases, noted in a press briefing Sunday that only one of the 20 confirmed U.S. cases had been hospitalized.

In Mexico, hundreds have been sickened with the same strain of swine flu that is affecting people in the U.S., and numerous people have died, with 12 of the deaths confirmed as the same strain. Canada has confirmed several cases, while New Zealand and Spain are investigating possible infections.

Why that strain at this point appears to be more lethal in Mexico is still a mystery, Schuchat said.

It's also too soon to say why it appears to be affecting young, healthy people as opposed to the very old and very young, who are generally the most vulnerable, she said.

But those numbers may change as more cases are diagnosed, which health officials expect.

Rebecca Villarreal, spokeswoman for the Schertz-Cibolo-Universal City district, said the situation is changing every day.

The school district has set up an information hotline at 210-619-4700 for parents and school employees to call for updates, Villarreal said.

“We recorded the message for the week, and if there's a change we'll update it,” she said, adding that the district is working on adding a Spanish version of the message. “We know we're going to have questions, especially come Friday, (when) the big question will be, ‘Is there going to be school on Monday?'”

The tone of that question may depend on whether it's being asked by parents or students.

“The kids are doing a happy dance,” said Ken Singel, who has a middle-school and high-school student in the district. “My wife's telling me that she's not going to let 'em out, but ... the little one is already agitating for Schlitterbahn.”

Singel's wife is a nursing professor, he said, so they're taking precautions, but are not overly concerned.