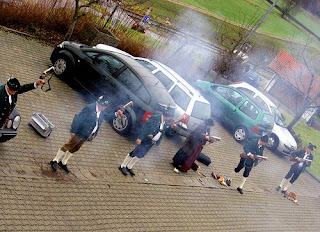 The illusion of a nice quiet town and place to live in shattered in the night.

Go get them NBPD!

Two people were shot in their front yard early Thursday morning, victims of a drive-by shooting.

New Braunfels Police Department responded to the 1800 block of Lee Street around 1 a.m. Thursday for a drive-by shooting that had just occurred.

Both were transported to Christus Santa Rosa — New Braunfels and then flown to University Hospital in San Antonio. Penshorn said both are in stable condition.

One neighbor, Ernie Rodriguez, painted a picture Thursday afternoon of the scene.

“It was around 12:40 a.m. There were a couple parties on the street and people were outside,” Rodriguez said. “All of a sudden, I heard someone crying, begging for help.”

He pointed out three bullet-holes on the side of his house.

“They hit my bathroom and my kitchen,” he said. “Bullets were flying left and right. I would not have expected this to happen. I’ve lived in this house for 12 years and nothing like this has ever happened.”

The victims had just moved in Wednesday, Rodriguez said — boxes and furniture were loaded into the house just hours before the shooting.

Penshorn said there are no suspects in the case. The vehicle was described as a sporty passenger car that was tan or brown with a T-top.

Aggravated assault with a deadly weapon is a first-degree felony punishable between five and 99 years and a fine up to $100,000.
Posted by Sam at 6:32 AM