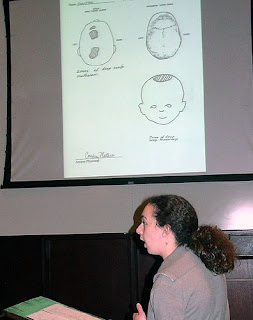 Guilty and probably probation because of her age.

(note: the picture is not from the trial)

The jury heard its second day of testimony Tuesday in the case of a New Braunfels woman on trial for allegedly abusing her newborn.

Amanda Bittner, 20, is facing five to 99 years in prison for five counts of felony injury to a child.

She is charged with causing extensive injuries to her 6-week-old daughter in January of 2007, including multiple skull fractures and bleeding in the child’s brain.

The state rested its case Tuesday, after the jury heard testimony from medical experts who described the nature and extent of the damage to the infant’s body.

Bittner originally took the child to the hospital on Jan. 31, 2007, with extensive bruising and signs of head trauma. After an investigation into possible abuse by the New Braunfels Police Department, Bittner was charged and arrested. She has been out on bond since August of 2008.

The child has since been put in adoptive care and is doing better, Assistant District Attorney Melissa Hines said on Monday.

The defense has not called any witnesses over the first two days of the trial, and closing statements are expected to begin today at 9 a.m. at the Comal County Courthouse in front of 207th District Judge Jack Robison.
Posted by Sam at 6:45 AM