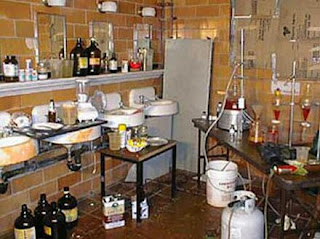 Well, this is just great news isn't it?

I have to praise State Rep. David Leibowitz for presenting a bill to rectify this deplorable loophole in the law.

Loophole keeps renters in dark
By Scott Sticker - The Herald-Zeitung

If you live in a rental apartment or leased property, you could be inhabiting a former methamphetamine production site without even knowing.

Currently, landlords are not bound by law to disclose whether a meth lab was ever present in a property they are leasing. Texas legislators with support from others are looking to change that.

Kirk Flippin owns and operates Texas Decon, a New Braunfels-based company that specializes in crime scene and meth lab cleanup around the nation.

He said House Bill 23, introduced by Rep. David Leibowitz of San Antonio and as of late Monday still pending in a subcommittee, could put pressure on landlords to be upfront with potential tenants.

“It requires landlords to disclose if the production of meth went on in the property to a tenant,” Flippin said. “They also must disclose any cleanup that took place and how it was performed.”

“Any environmental hazard or criminal activity must be disclosed in the sale of a house,” Edwards said. “The property owner does not have to provide that information on a rental form, though.”

Generally, real estate companies won’t take a rental that has such history, he said.

“Most reputable companies would not take a rental that would put the general public at risk,” he said.

Flippin said he has seen families move into properties they had no idea had been former meth labs, such as a recent cleanup he handled in Dallas.

“A family moved into a residence which they didn’t know meth was cooked in,” he said. “Their family dog died, and they started to get sick.”

At that point, he said, Texas Decon was called in.

“I ended up having to throw away some of the daughters’ toys and the mother’s clothes,” he said. “When (the daughter) saw what I was doing, she looked at me and said ‘a bad man messed up our house.’ I told her ‘yes, a bad man did mess up your house.’”

Since Flippin started Texas Decon in 2004, he said he has witnessed these scenes with more frequency throughout Texas.

“I’ve seen about a 50 to 60 percent increase in meth labs this year alone,” he said. “I’m not sure if it’s the down economy or people losing their jobs, but it seems to be a lot more prevalent. People need to be educated.”

“We recognize that there is a drug problem in the city,” Penshorn said. “The best way to avoid a potentially bad situation is to educate yourself.”
Posted by Sam at 6:14 AM