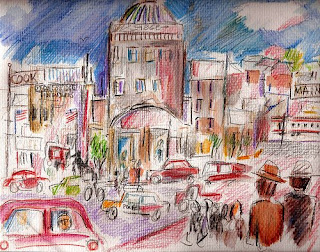 And we're off. The announcements were for a a week long trial and as this is a short week it will probably go into next week.

Prosecutors and defense attorneys spent Monday selecting the jury that will try Robert Smith, a Canyon Lake resident accused of killing his live-in girlfriend at the couple’s home in July 2008.

Smith, 40, is alleged to have “intentionally and knowingly” stabbed 53-year-old Nancy Shields repeatedly in their mobile home at 1235 Hedgestone on July 11, according to a November indictment.

Shields was alive when emergency crews responded to the home at around 9 p.m. but died from severe blood loss after being airlifted to Brooke Army Medical Center. A subsequent autopsy determined her knife wounds could not have been self-inflicted, and Smith was arrested and charged with homicide on July 17. Family members said the couple had lived together since May 2006.

If convicted, Smith could face five to 99 years or life in prison, according to the Comal County District Attorney’s office.

Jury selection wrapped up Monday, and the trial’s opening arguments are expected to be heard at 9 a.m. today.
Posted by Sam at 5:30 AM