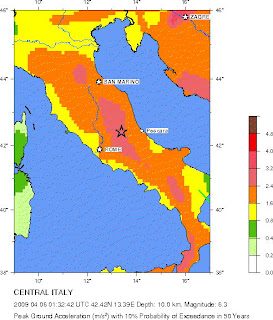 Geologist cited for sounding the warning too soon.

I'd say radon gas leaking from seismically active areas is a pretty good indicator that things are shifting underground.

Chicken Little he ain't; apparently he was just a little early.

Too bad folks didn't heed him.

ROME, April 6 (Reuters) - An Italian scientist predicted a major earthquake around L'Aquila weeks before disaster struck the city on Monday, killing dozens of people, but was reported to authorities for spreading panic among the population.

The first tremors in the region were felt in mid-January and continued at regular intervals, creating mounting alarm in the medieval city, about 100 km (60 miles) east of Rome. Vans with loudspeakers had driven around the town a month ago telling locals to evacuate their houses after seismologist Gioacchino Giuliani predicted a large quake was on the way, prompting the mayor's anger.

Giuliani, who based his forecast on concentrations of radon gas around seismically active areas, was reported to police for "spreading alarm" and was forced to remove his findings from the Internet. Italy's Civil Protection agency held a meeting of the Major Risks Committee, grouping scientists charged with assessing such risks, in L'Aquila on March 31 to reassure the townspeople. "The tremors being felt by the population are part of a typical sequence ... (which is) absolutely normal in a seismic area like the one around L'Aquila," the civil protection agency said in a statement on the eve of that meeting. "It is useful to underline that it is not in any way possible to predict an earthquake," it said, adding that the agency saw no reason for alarm but was nonetheless effecting "continuous monitoring and attention".

As the media asked questions about the authorities' alleged failure to safeguard the population ahead of the quake, the head of the National Geophysics Institute dismissed Giuliani's predictions. "Every time there is an earthquake there are people who claim to have predicted it," he said. "As far as I know nobody predicted this earthquake with precision. It is not possible to predict earthquakes."

Enzo Boschi said the real problem for Italy was a long-standing failure to take proper precautions despite a history of tragic quakes. "We have earthquakes but then we forget and do nothing. It's not in our culture to take precautions or build in an appropriate way in areas where there could be strong earthquakes," he said.
Posted by Sam at 7:28 AM