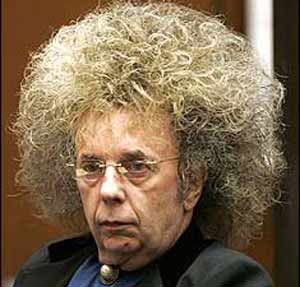 He was a good music producer now he can do it from prison.

I recall how he did some great work on the Beatle's music and we called it "Spectorizing" the music.

Its about time an LA jury convicts a celebrity, eh?

Six years after Clarkson was found dead in the foyer of Spector's mansion, the diminutive 69-year-old now finds himself in a Los Angeles jail cell after he was convicted on Monday. His sentencing is scheduled for May 29 where he faces at least 18 years to life in prison barring a successful appeal.

Spector, wearing one of his signature suits with a long black coat, red tie and red handkerchief, had no obvious reaction. His 28-year-old wife, Rachelle, sobbed as the verdict was announced. Spector was led out of the courtroom by sheriff's deputies and remanded to jail immediately.

"He took it very stoically," defense attorney Doron Weinberg said later. "He wanted to know what is next."

The jury forewoman, who spoke later, also wept. She recounted the pressure of deciding the fate of another person.

"It just is a painful decision," she said. "For anybody in our shoes, you have no idea. It's tough to be on a jury."