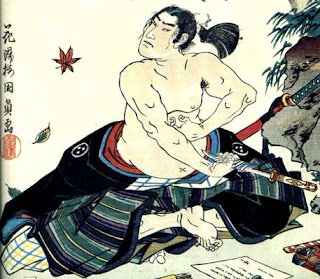 I do not believe that the jury will believe she committed sepukku.

What we generally call hari-kiri here in the U. S.

A jury was told the story of Nancy Shields’ stabbing death through blood spatter and video evidence Wednesday.

An indictment that was read aloud at the trial’s opening Tuesday morning states Smith “intentionally and knowingly” stabbed Shields repeatedly in their mobile home at 1235 Hedgestone on July 11, 2008.

Pippin reviewed photographs of blood from Smith’s clothing, hands and forearm and from the scene. He described a trail of blood leading around the mobile home’s kitchen from the dishwasher to the couple’s bedroom.

“Based on the wound locations, the orientation of the wounds, the wound tracks, the close quarters they were in, the blood stains ... it’s my opinion that the stabbing occurred while the defendant held the knife in his right hand ...” Pippin started before being interrupted by Barr.

Barr called Pippin from the stand and asked him to demonstrate what he believed happened the night of July 11, 2008.

Holding a wooden ruler as the steak knife with which police allege Smith stabbed Shields, Pippin stood behind Barr.

“The wounding happened from behind,” Pippin said. “The weapon was held ... in his right hand with the blade side not towards his fingers, but towards his thumb.”

He said the blade caused a slight cut on Smith’s thumb which explained the blood on his hand.

Smith sat calmly through the trial, occasionally cocking his head at witness statements.

Four of Sheilds’ close friends — who described themselves as her “church family” — sat in the front row. As Esman played the original 911 tape from the night of the alleged stabbing, they clutched each other as tears welled in their eyes.

Esman showed the jury a DVD depicting what Comal County Sheriff’s deputies filmed on July 12, the night after the alleged murder.

In the video, a drunken Smith explained to officers what he saw that night.

“She stood over here,” Smith explained. “She shouted ‘you did this to me (expletive).’ She grabbed the knife and stuck herself.”

Near the end of the video, Comal County Sheriff’s Detective Sgt. Tommy Ward asked Smith straight-forward if he stabbed Shields.

Esman will continue his case through today and told the judge he hopes to have it wrapped up by the end of the day.
Posted by Sam at 6:45 AM