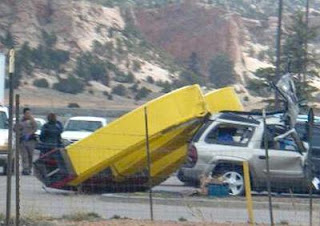 I see a huge lawsuit outta this.

What would have been more perfect would be if they got burnet by their hot coffee.

I hope they recover completely.

A giant set of golden arches outside a McDonald’s in eastern Arizona toppled in high winds Wednesday, crushing a Naperville couple’s Chevy Trailblazer as they sat inside the parked vehicle.

Retirees Russell and Carolyn Janke suffered multiple injuries. They had stopped at the McDonald’s on the Navajo Nation reservation in Window Rock as they were making their way back to suburban Chicago from their winter home near Tucson.

Navajo acting Police Chief Steven Nelson said winds hit 60 mph Wednesday, causing the sign to be blown down from atop a pole across the street from the restaurant.

“It was a freak accident,’’ Nelson said.

Carolyn Janke, 68, was trapped inside the SUV and had to be cut out of the vehicle by rescue crews, Nelson said.

Both were taken to the Fort Defiance Indian Health Service. Carolyn Janke was later transported to St. Joseph’s Hospital and Medical Center in Phoenix — about six hours from Window Rock — where she remained in intensive care Thursday, her daughter-in-law, Ann Janke, told the Chicago Sun-Times.

Carolyn Janke, who was knocked unconscious, has a fractured spinalcolumn and a fractured sternum, her daughter-in-law said. Russell Janke, 70, a retired engineer, was hit in the head and “has over 70 stitches,” she said.

Ann Janke said she’s desperately trying to get more information about the accident.

“How could that sign not be properly secured? That’s what I want to know,” she said. “I’m mad. You don’t think you park under a sign . . . and giant golden arches are going to come smashing down on you.”

Roy Talker, the owner of the Window Rock franchise, issued a statement Thursday, saying, “We are genuinely concerned about the recovery of those involved. We are fully cooperating with the authorities on their investigation.”

Talker also said, “Without having all the facts, it would be inappropriate to speculate on what may have happened.”

Nelson said the incident was still under investigation but said,“We have not had any reports of any problems with the sign.’’

But Richardson Laughing, who works nearby, said he has been worried about the sign toppling for a while.

“I’ve been working here two years and I’ve seen it blow back and forth in the wind,’’ Laughing told the Navajo Times newspaper. “I’ve been saying to my wife that it’s going to blow over sometime.’’

Janke doesn’t know what she’s going to tell her two small children who are eager to see their grandparents, who recently sent Easter gifts in the mail.