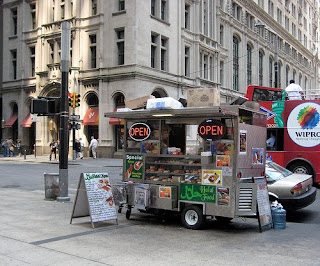 I would think it would be a hard sell.

CHICAGO — A Chicago alderman says he doesn't mind that a businessman plans to open a hot dog stand in his ward and hire former convicts to work there, but he does object to the stand's crime-linked theme.

Alderman Fioretti said Friday his Second Ward on the city's West Side has major crime problems, so he thinks the stand's name, Felony Franks, is simply not in good taste.

Fioretti also objected to several slogans, including: "Food so good, it's criminal," and "Home of the misdemeanor wiener."

Stand owner Jim Andrews, though, says he thinks the tongue-in-cheek name and a menu that features such items as "burglar beef" and "chain gang chili dog" will help to erase some of the stigma that being a former convict carries.