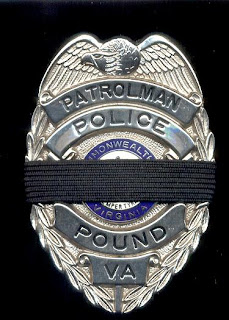 Another nut case or a copycat case?

A copycat because of the recent murders of 4 officers in Oakland.

We'll never know and does it really matter? My heart goes out to the families of the fallen and wounded police officers.

PITTSBURGH (AP) -- A gunman wearing a bulletproof vest and armed with an assault rifle held police at bay for hours as their fallen officers were left bleeding nearby, their colleagues unable to reach them.

When it was over four hours later, three officers were dead and more than 100 rounds had been fired by SWAT teams and the gunman on the quiet Pittsburgh street, police said.

Richard Poplawski, 23, was charged with three counts of homicide, aggravated assault and a weapons violation. He had gunshot wounds in his legs but was otherwise unharmed because he was wearing a bulletproof vest, Harper said.

"It appears he was lying in wait for the officers," Harper said.

Eric Kelly, 41, a 14-year veteran of the force on his way home after completing his overnight shift heard the call for help and rushed to the scene. He also was shot and killed.

SWAT teams and other officers arrived and were also fired upon.

Don Sand, who lives across the street from Poplawski, said he was woken up by the sound of gunfire. Hunkering down behind a wall in his home, he saw the first two officers go down and then saw Kelly get shot.

Deputy Chief Paul Donaldson, who lives nearby, was one of the first officers to arrive. He saw Mayhle by a bush to the right of the door; Kelly was in the street.

Another officer, Timothy McManaway, who had been shot in the hand, was kneeling beside him, yelling that Kelly needed help.

Donaldson suggested using a police van to get them. They draped a bulletproof vest on the window to protect the driver and several officers got into the van to get Kelly and McManaway.

During this time, Poplawski was somehow distracted, Donaldson said.

"We were fortunate that he didn't fire on us. I don't know why he was distracted, but he apparently didn't see us coming down to get them," he said. "It could have been worse."

Poplawski had feared "the Obama gun ban that's on the way" and "didn't like our rights being infringed upon," said Edward Perkovic, his best friend.

Perkovic, 22, said he got a call at work from him in which he said, "Eddie, I am going to die today. ... Tell your family I love them and I love you."

Perkovic said: "I heard gunshots and he hung up. ... He sounded like he was in pain, like he got shot."

Poplawski had once tried to join the Marines, but was kicked out of boot camp after throwing a food tray at a drill sergeant, Perkovic said.

Another longtime friend, Aaron Vire, said Poplawski feared that President Barack Obama was going to take away his rights, though he said he "wasn't violently against Obama."

Vire, 23, said Poplawski once had an Internet talk show but that it wasn't successful. He said Poplawski owned an AK-47 rifle and several powerful handguns, including a .357 Magnum.

Obama has said he respects Americans' constitutional right to bear arms, but that he favors "common sense" gun laws. Gun rights advocates interpret that as meaning he would approve some curbs on assault and concealed weapons.

Poplawski had been laid off from his job at a glass factory earlier this year, said another friend, Joe DiMarco. DiMarco said he didn't know the name of the company, but knew his friend had been upset about it.