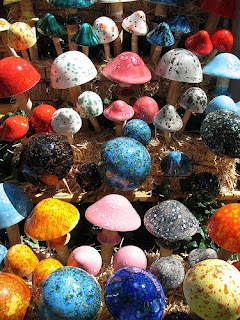 Get back to me if it works.

Ingram, 32, strongly believes that God gave us marijuana and mushrooms and that these “gifts” should be celebrated, not used as a cause to arrest folks. As he was arrested for possession of mushrooms in December, he hopes to plead this defense to a jury.

“The point I'm trying to make is that God's law is higher than man's law,” Ingram told me. He was out protesting downtown last week, carrying a sign that said “Mushrooms & marijuana come from God.”

A little background: Ingram had planned to attend the Warren Haynes Christmas Jam on Dec. 13 and was sitting in his car near downtown, sipping on a cold beer out of a coffee mug and sampling a hallucinogenic mushroom or two.

“I had the bag open, and I put one in between my lip and my teeth — I put it in sort of as a dip, because you really don't need that much,” Ingram said. “I looked over, and I had blue lights on me.”

He wasn't hallucinating quite yet. Asheville's finest were on the scene and proceeded to search his vehicle and discovered what they said was 10 grams of hallucinogenic mushrooms.

Ingram disputes that amount, noting that he bought a quarter-ounce, or seven grams, and had taken some, leaving at most 6 grams. At any rate, he found himself charged with felony possession of illegal drugs.

It's a Class-I felony, and Ingram has a relatively clean record, so he's likely facing a maximum sentence of probation and mandatory drug testing. But Ingram, a graduate of Auburn University with a degree in management information systems, doesn't want his record besmirched.

“Not only that, but I can't run for public office, I can't vote, I can't go to law school — this felony would basically follow me for the rest of the life,” he said.

So, with his public defender, he recently went to seek leniency or possibly dismissal of the charges from District Attorney Ron Moore. The meeting did not go well, possibly because Ingram admittedly got quite stoned before the visit.

“This guy was mean,” Ingram said of Moore, acknowledging that “my eyes were red from smoking marijuana. He was trying to get me to rat out who the mushrooms were from. He said, ‘Where did the mushrooms come from?' I said, ‘From God.'”

He replied similarly when asked where the pot came from and says Moore quickly lost patience with him, saying Ingram should not drive home. “He lumped me into a bunch of people he considers no-gooders,” Ingram said.

Ron Moore was out last week and I couldn't get a comment from him. Assistant District Attorney Chris Hess said the office does not comment on pending cases.

I've talked to Moore — a law and order kind of guy who can be a real hard case — many times — and I suspect he was not amused with Ingram's legal approach.

Ingram says he has a court date Monday, but the DA's office said he's on the docket for May 4. Today's hearing may be about the legality of the search and a motion for suppression Ingram's public defender has filed.

Ingram said his public defender (who didn't return my calls) is going to argue the search that turned up the mushrooms was illegal because the hallucinogens weren't visible, and he was simply drinking in public.

In a way, though, Ingram wants the chance to argue his “God gave us mushrooms” defense to a jury. Ingram believes so deeply in his use of marijuana and mushrooms that he considers it close to being his religion.

“I don't do any kind of synthetic drugs — I don't even like pills,” he said. “God gave us marijuana and mushrooms to use. If you have a good, sound mind and body, they can be a very spiritual and uplifting experience.”

And he's convinced that 12 of his Buncombe County peers will be sympathetic to his cause.

“I feel if it goes to the jury I'll have a good chance, because I'll have 12 of my peers judging me,” said Ingram, obviously a “glass half full” guy when it comes to optimism. “Unfortunately, they'll kind of have to go against the law to find me innocent. But I want to say there's a higher law.”

Sure, Ingram may be happily delusional, but you've got to admit he might just be the most optimistic 'shroomer in America.