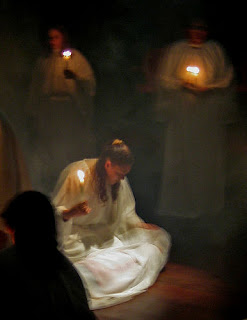 I weep for the children.

GRAHAM, Wash. (AP) ― A father apparently shot to death five of his children, ages 7 to 16, at their mobile home and then killed himself near a casino miles away, police said Saturday.

Ed Troyer, a spokesman for the Pierce County Sheriff, called it a domestic violence situation and a murder-suicide.

"We believe they all died of gunshot wounds," Troyer said.

Police early Saturday found the father slain from a self-inflicted gunshot wound. He was in his car, parked near the Muckleshoot Casino in Auburn, about 30 miles south of Seattle. Later in the day, Pierce County deputies checked the mobile home, which is about 20 miles southeast of the casino, and found four of the children dead in their beds and the fifth in the bathroom.

Neighbors in the Deer Run mobile home park, a neat, well-kept community nestled among towering evergreens, were shocked and weeping at the news.

"How could something like this happen?" asked Mary Riplinger, whose kids were playmates of the slain children. "Everyone's asking: Why did he do it? It's not right."

The mother of the victims was not at home, Troyer said.

He said investigators believe the husband and wife were not estranged.

"Clearly she's been very traumatized," Troyer told The News Tribune of Tacoma. "You kind of get hardened to seeing people who are killed because of their own bad actions. But these kids died through no fault of their own. This is something you never want to see."

Authorities did not release the names of the family, but Troyer identified the dead children as four girls and a 7-year-old boy.

Another neighbor, Dale Lund, told The Seattle Times the 7-year-old boy who was killed played at times with his grandson and the boys shared the same school bus stop and attended the same elementary school together.

He said the dead boy played in his own yard most of the time.

"They pretty much kept to themselves over there," Lund said.

Dozens of investigators were on the scene trying to reconstruct the crime and discover a motive.
Posted by Sam at 7:49 AM