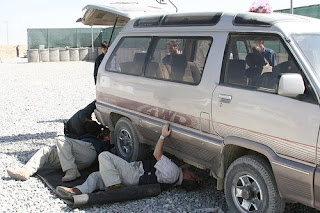 I don't think this will be as problematic as I first thought as I skimmed through the case.

There will still be valid reasons including an "inventory" search, I believe.

It's too early for local law enforcement agencies to know the impact of a U.S. Supreme Court decision in an Arizona case that limits warrantless searches of vehicles, officials said.

Last week, the Supreme Court ruled unconstitutional a search that turned up drugs in a vehicle belonging to a man arrested on a traffic violation charge. He was handcuffed and did not pose a threat to the officers, and because of that the high court ruled the search was a violation of his rights.

A generally accepted procedure is for officers to search a vehicle following an arrest, regardless of the reason for the arrest or the threat posed. In the 5-4 opinion in Arizona v. Gant, the justices ruled that too many average Americans are subject to warrantless vehicle searches.

The San Antonio Police Department and the Texas Department of Public Safety said they are studying the issue, but neither could say if any changes would be made.

Legal experts point out there are plenty of valid reasons for an officer to search a person's vehicle, whether it's by consent, with probable cause or in a case in which the vehicle is impounded.

Bexar County First Assistant District Attorney Cliff Herberg said it remains to be seen how local courts will interpret the decision, but he does not believe the impact will be as broad as some fear.

“People are always surprised to find they don't have a lot of privacy in the car,” he said. “If you don't want it to be found, don't put it in your car.”

Also, the court's decision does allow for a search if the person still has access to the vehicle, or if evidence related to the arrest is likely to be inside the vehicle. In a dissenting opinion, justices said the ruling could cause confusion among law officers.

Mike Helle, the San Antonio police union president, said more evaluation of the ruling is needed but he didn't think it would cause too much of a disruption.

“It may mean that it makes the job a little more difficult, but I think in the end the job will still get done,” he said.

Gerald Reamey, a constitutional law professor at St. Mary's University School of Law who consults for police departments, believes the ruling tightens the policy and is actually better for officers.

“This will not cripple law enforcement,” he said.

James McLaughlin, general counsel for the Texas Police Chiefs Association, said the agency has heard concerns from across the state. He too is uncertain how the ruling might affect departments.

“I think we have to wait and see,” he said. “One of the concerns is officer safety, and what the justices thought is once you got them secured they shouldn't be a threat to you.”