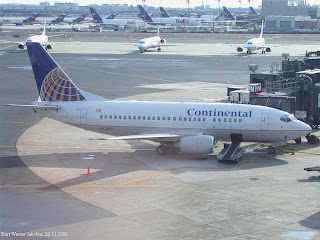 A big law suit coming I would guess.
Turbulence blamed for paralyzing woman in Continental flight
By Ryan Holeywell, The Monitor

McALLEN - A woman was paralyzed and two other people were injured during a turbulent flight from Houston that arrived here early Saturday morning.

The woman, 47, was using the plane's bathroom when the aircraft encountered turbulence and descendent rapidly, throwing her against the ceiling, said Dr. Trey Fulp, an orthopedic spine surgeon treating her at McAllen Medical Center.

He said the woman suffered a fractured neck and was scheduled to undergo surgery on it Monday.

Doctors spent 6 hours operating on her back after the plane landed.

The back injury left her paralyzed from the chest down, Fulp said.

Although some patients recover from this sort of injury, it's unclear whether she will ever be able to walk again, Fulp said.

"Anytime you're dealing with a paraplegic, only time's going to tell," Fulp said.

He did not release the woman's name, citing privacy concerns, but he said she is a local resident.

As of Monday morning, the woman was on a ventilator. He said she is alert, talking and has been visited by family members, but she remains very scared.

The plane, a 737, experienced turbulence after it had begun its descent to McAllen, said an investigator with the National Transportation Safety Board.

There were 104 passengers aboard the plane. Mary Clark, a Continental spokeswoman, said another passenger and a crew member were also treated for injuries but were released from the hospital.

Once NTSB confirms for itself that the woman was paralyzed, the agency will launch an investigation.

Clark said the flight left Houston late at night after being delayed. The seatbelt signs were illuminated when the plane experienced "sudden turbulence," she said.

Both Clark and NTSB officials said they knew no other details of the event.