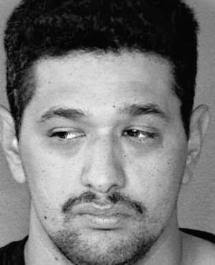 That was really quick work.

The ex-boyfriend of a 35-year-old woman found dead inside her Northeast Side home was charged with murder Thursday morning after he had been arrested near Houston the day before, authorities said.

A federal marshals' task force arrested Isidro Michael Veloz Jr., 32, on Wednesday after tracking him to a Wal-Mart in Sealy, authorities said. Veloz was arrested in the parking lot after leaving the store.

He initially was detained for violating a protective order that former girlfriend Yvette De La Cruz had filed against him, a San Antonio Police Department spokesman said.

De La Cruz's father found her body around 10 a.m. Wednesday in her house in the 5100 block of Sierra Madre.

Witnesses said her neck had been broken and that she had been suffocated, but police declined to say how she was killed.

A police report said De La Cruz's head was wrapped in duct tape and that her partially nude body was found in the bedroom.

Witnesses told police they saw Veloz outside De La Cruz's residence the day her body was found, according to the report. The report also said Veloz and De La Cruz had a history of domestic violence.

The Bexar County medical examiner's office was set to do an autopsy on De La Cruz on Thursday.

Veloz remains in Austin County Jail and will be extradited to San Antonio within 30 days, a spokesman for the Bexar County Sherriff's Office said.