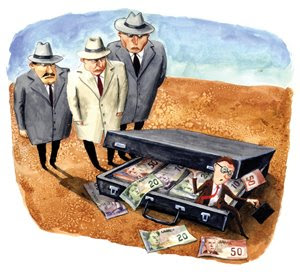 Stay away from the money. My thoughts.

Sometimes its just better to say no thank you.

The Texas Senate gave preliminary approval Thursday to legislation allowing the state to receive $555 million in federal stimulus money for unemployment benefits, despite Gov. Rick Perry's assertion that he does not want those dollars.

The Senate voted 22-9 for the proposal by Sen. Kevin Eltife, R-Tyler, to expand the state's unemployment program in order to accept that money. Eltife said he hopes the Senate will give the measure final approval Monday before it heads to the House.

Eltife's bill would alter the work period used to determine unemployment eligibility and benefits, a required change that alone would get the state $185 million in federal money.

To qualify for the remaining $370 million, Eltife has proposed extending benefits to workers looking for part-time jobs and to people who have left a job for "compelling family reasons," such as illness or a spouse's move to a new job.

Perry has argued that taking the stimulus dollars would force Texas to expand the unemployment program.

With opposition from some business groups, there were questions about whether Eltife could persuade eight fellow Republicans to join with Democrats to give him the 21 votes he needed to bring the bill up for consideration. Ultimately, 12 Democrats and 10 Republicans voted for the bill. Now he'll need to get 21 again to bring it up for final passage.

Opponents of the bill will probably pressure some senators to change their vote before Monday.

Eltife argued to senators that taking the federal money would allow the state to borrow less to help its struggling unemployment trust fund.

"The changes in this bill are paid for for nine full years by the stimulus money," Eltife said. "We have nine years — that's four more sessions — to revert back to current law."

But Texas Association of Business President Bill Hammond, who opposes the bill, said he doubts the Legislature would go back to current law.

"We've tried to pass some fairly moderate reforms over the years, and labor has tried to pass some of these changes that were enacted today, and neither side has had any luck," he said. "The fact is that it's much easier to kill a bill than it is to pass a bill."