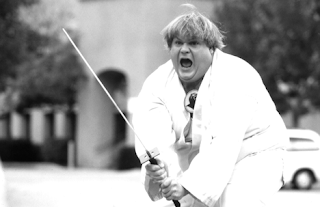 In Texas he'd have been shot.

Police said a man dressed liked a ninja used a sword in an attempt to rob a Weymouth dry cleaner.

According to police, a convenience store clerk called police Monday after she noticed a man walking into the store wearing a ski mask and a sword in a sheath on his belt. Police said that when the man noticed her, he pulled his mask off and asked whether she was calling about him.

When she said she was, the man left the store and walked into nearby Galaxy Cleaners. There, he pointed a sword at the register and asked a clerk to give him all of the money, police said. He left after she told him she couldn't open the drawer.

Police are still searching for the man, who witnesses said appeared to be in his late 20s.
Posted by Sam at 6:53 AM