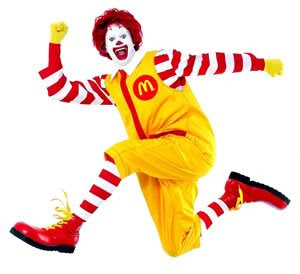 My! Someone had their heart set on a hamburger didn't they?

Not 'lovin' it,' he shoots Mickey D's drive-through
Man fired sawed-off into window after being told menu was breakfast-only.

A McDonald's drive-through was shot up early Sunday after a customer was angered that the restaurant had shifted from the lunch menu to the breakfast menu, police said.

The driver of a white Dodge Intrepid pulled into the drive-through at about 2 a.m. at McDonald's at 210 W. 500 South in Salt Lake City and ordered food from the lunch and dinner menu, police said.

When a clerk told her the restaurant was serving only items from the breakfast menu, the woman drove to the second window, police said. Two men got out of the car, and one pulled a sawed-off shotgun out of the trunk, police said. He fired once or twice into the drive-though window before the two men and the woman left on 500 South and turned north on 300 West, police said.

The Intrepid was last seen going west over the viaduct on 400 South. The shooter was described as Polynesian, 6 feet 1 inch tall, with long hair in a ponytail, a beanie cap and a white T-shirt, police said.

No one was injured in the shooting, police said. Officers did not know how many employees were in the restaurant at the time.