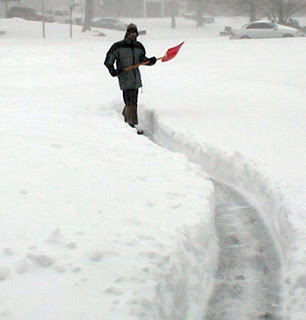 Man, I hated shoveling snow when I lived up north back during the Pleistocene era.

But still this is too much.

The case has shocked Stamford's "Cove" neighborhood. Willi Almonte-Rodriguez, 19, was charged with second-degree assault. He and his 17-year-old brother were accused of attacking their father after he asked them for help shoveling snow.

"They sort of refused to shovel the snow then at one point the 19-year-old struck the father in the back of the head with the shovel, knocking him to the ground. Then the 17-year-old hit him in the back with his own shovel," said Lt. Sean Cooney of the Stamford Police.

"Anybody who hits their father over the head with a shovel, I can't believe it. He should be helping his father," Kolar said.

Police say Almonte and his brother had only recently moved to snowy Stamford. Until about a month ago they lived with family members in the sunny Dominican Republic.

"It appears perhaps they didn't see eye to eye with the dad about their responsibilities if they were gonna live in the house," Cooney said.

Tuesday afternoon in court, a lawyer for the 19-year old said the shovel attack may have been self-defense, but police said their investigation shows the young men attacked their father in anger then fled the scene.

"We were summoned by family members, found the father dazed and bleeding in the garage, got him medical treatment, a few minutes later found the two sons a few blocks away," Cooney said.

Bond was set for Almonte at $10,000 and he was hit with a restraining order telling him to stay away from his father.
Posted by Sam at 7:16 AM