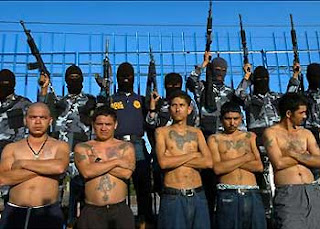 Atlanta is a long way from the Border, isn't it?

Makes me feel real safe; what other things are coming over the Border and getting set up?

ATLANTA — In a city where Coca Cola, United Parcel Service and Home Depot are the titans of industry, there are new powerful forces on the block: Mexican drug cartels.

Their presence and ruthless tactics are largely unknown to most here. Yet, of the 195 U.S. cities where Mexican drug-trafficking organizations are operating, federal law enforcement officials say Atlanta has emerged as the new gateway to the troubled Southwest border.

Rival drug cartels, the same violent groups warring in Mexico for control of routes to lucrative U.S. markets, have established Atlanta as the principal distribution center for the entire eastern U.S., according to the Justice Department's National Drug Intelligence Center.

In fiscal year 2008, federal drug authorities seized more drug-related cash in Atlanta — about $70 million — than any other region in the country, Drug Enforcement Administration records show.

This year, more than $30 million has been intercepted in the Atlanta area — far more than the $19 million in Los Angeles and $18 million in Chicago.

Atlanta has not seen a fraction of the violence that engulfs much of northern Mexico, but law enforcement officials are increasingly concerned about the cartels' expanding operations here.

"The same folks who are rolling heads in the streets of Ciudad Juárez" — El Paso's Mexican neighbor — "are operating in Atlanta. Here, they are just better behaved," says Jack Killorin, who heads the Office of National Drug Control Policy's federal task force in Atlanta.

An added attraction for the cartels, say Nahmias and Rodney Benson, the DEA's Atlanta chief, is the explosive growth of the Hispanic community.

"You see Mexican drug-trafficking operations deploying representatives to hide within these communities in plain sight," Benson says. "They were attempting to blend into the same communities as those who were hard-working, law-abiding people."

The cartel representatives here range from the drivers, packagers and money counters to senior figures in the drug trade.

"We've got direct linkages between cartel representatives who take their orders from cartel leadership in Mexico," Benson says.

From the border, shipments of marijuana, cocaine, methamphetamine and heroin are routed over land to Atlanta for storage in a network of stash houses. They are then moved to distribution operations in the Carolinas, Tennessee, the Mid-Atlantic, New York and New England.

Cash is generally moved over the same routes back to the Atlanta area, where balance sheets are reconciled. The bundles of money are turned over to transportation units for bulk shipments back to Mexico, Benson says.

Although the level of drug-related violence in Mexico has not surfaced in the Atlanta area, recent incidents have raised concerns among law enforcement officials.

Last July, for example, a Rhode Island man who allegedly owed $300,000 to Atlanta-based traffickers was found chained to a wall in the basement of a Lilburn, Ga., home, located in western Gwinnett County.

Benson says the man had been blindfolded, gagged and beaten. Federal investigators, who were alerted to the location, later found the man alive but severely dehydrated. Three Mexican nationals fled the house when authorities approached. All three were captured and a cache of weapons, including an assault rifle, was seized.

"There is no doubt in my mind that … we certainly saved his life," Benson says.

About the same time last year, another man was kidnapped in Gwinnett County for non-payment of drug proceeds. When traffickers went to pick up what they thought was a $2 million ransom, shots were exchanged between the traffickers and police who were working with the victim's family. One of the suspects was killed and the other arrested, Benson says.

Killorin says much of the violence has been related to similar incidents of "intra-cartel discipline" and has not spilled into the streets.

There is no mistaking the groups' influence.

"We know they're here," Gwinnett County Police Cpl. Illana Spellman says, adding that the area's access to interstate highways is a major lure. "Geographically, it's set up perfectly for these kinds of activities."